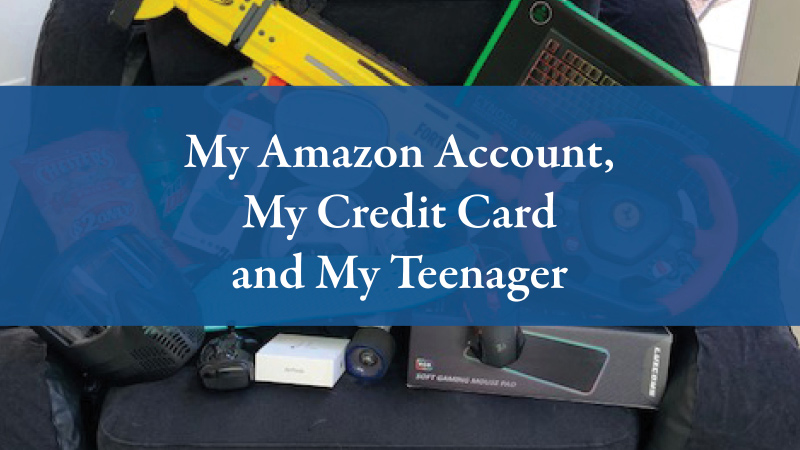 It’s an adventure – as Traci recently discovered when her 13-year-old son went on an Amazon shopping spree:

Tommy wanted to upgrade his Xbox gaming console, and give his old one to his little brother as a birthday present. To help Tommy finance this purchase, I offered to buy his used device. We came to terms and I paid him $700. With that money, he opened his first bank account and got his first debit card, which he used to buy the new Xbox for about $400, leaving him with $300.

Soon, boxes from Amazon started arriving. An inflatable chair and couch appeared in his room. Then a few weeks later, my credit card company called. They had set up a fraud alert after declining 31 attempts to purchase stuff on Amazon using my card. Suddenly, I remembered all of the boxes. So I asked Tommy to show me the Amazon account on his laptop. There were 6 pages of orders!

Apparently, he started buying items with his debit card, plus a handful of Amazon gift cards he’d received. After Tommy exhausted those options, Amazon defaulted to my credit card, which I had used several months earlier. Fortunately, the expiration date on my card triggered the fraud alert and prevented those 31 most recent purchases from going through.

All told, my son ordered $1,908 worth of items, including Apple AirPods, gaming equipment, keyboards and headsets for friends, a case of Mountain Dew, Cheetos, a Nerf gun and more. It was like he was building a little fraternity room in our house! Once the truth came out, my husband and I devised a three-point punishment:

1) Tommy immediately lost everything he bought and the rest of his technology (no phone, no TV, no nothing). The upside? He was more fun without it. We played board games together. It was lovely to have my son fully present instead of buried in his phone all of the time!

3) He has to write an essay about what he did, what he learned – and it must be 1,908 words long. For now, he needs to earn back our trust before we return his electronics.

Brian and I really had to embrace this as a teachable moment. As parents, we want our kids to take risks and learn from them early on, when the stakes are low. Frankly, I’d rather have Tommy make mistakes like this at 13 when the financial consequences are relatively small versus at 23, when it might be years before he could dig himself out of debt.

Yet Tommy’s story isn’t just a cautionary tale for parents – it can also apply to adults prone to impulse buys. Or people who buy houses based on the mortgage they qualify for, instead of the mortgage they could afford in the event of job losses or health crises.

In the end, I think our family learned a truly priceless lesson. By sharing our experience, I hope we’ll inspire other parents to speak with their kids about responsible spending. (And if you need talking points, I have a 1,908-word “discussion starter” heading my way shortly!)